A little while ago, my interest was piqued while visiting my grandparents in Portsmouth. I was experiencing Sunday train delays at their finest, so they took me for a walk to see the newish statue commemorating the mudlarks on The Hard. My grandpa, the most avid history-lover I’ve ever met, started going into the backstory of the mudlarks from when he was a policeman in the 1950s/60s.

I’ll go into more detail after my review. My interest in mudlarks having been caught, I stumbled upon the following book on Amazon: 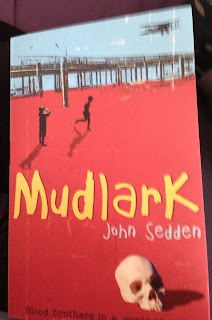 Portsmouth 1914. Reg and Jimmy are mudlarks. They dive for coins in the thick mud of the harbour. But one day Reg finds a skull – and it changes everything. It starts a murder hunt that lands them both in serious trouble with the police. They’ve always done everything together – and now they’re facing death.

Although mudlarks were also found in London, diving for pennies in the Thames mudbanks, this book is set in Portsmouth, so I was really enthusiastic to read this, hoping I’d know where the characters were larking about. Going to stay with my grandparents every half term means I know the area fairly well. Sure enough, most of the time I knew where the characters were, which added to my enjoyment of the book. In general, though, Sedden describes the scenes well enough that anyone could pick the book up and become immersed in the landscape of the book.

Jimmy and Reg, the first-person protagonist and his best friend, were really realistic too – there were things like Reg having a stutter, the number of dead-arms the boys give each other (!) and the sense of guilt Jimmy feels when he realises he’s in the wrong, which made the boys really 3D, relatable characters.

I loved that the book brought to life a picture of not only mudlarking, but the start of the First World War and everyday people’s reactions to it. The twists that take place in the book can’t be guessed from the blurb, and I found myself surprised a lot of the time. The solution to the mystery had to be explained to me just as much as it did to Jimmy and Reg, which is rare, as I can usually guess what’s coming from at least a couple of pages before. PLUS, the solution was historically accurate. Double tick!

I’ve since lent this book to a workmate’s 11-year-old son, so I’ll update if I hear an opinion from him. I reckon this book will appeal to boys (and probably girls too!) around 11-14, especially those with a love of history. Mind you, once I get the book back I’ll be sending it to my grandpa, who I’m sure will love it. It’s his old stomping ground, after all, although he’s never been as nasty as the policemen in the book!


This book has given me a new idea. I’m a complete history geek, so I was thinking maybe once a month I’d do what I’ve done today – review a historical fiction (or possibly nonfiction – such as The Diary of Anne Frank) book, and then go a little deeper into the history behind it. I love researching these things, and if it’s something others would want to read, that’d be great!

Feedback would be greatly appreciated – please let me know what you think, and whether you’d read something like this! I was thinking the first weekend of every month, and calling it Weekend Walkthrough :-). 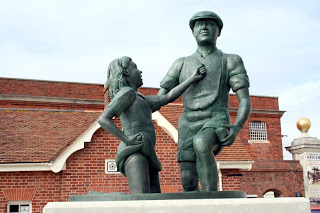 The nearby statue commemorates the generations of Portsea children who enjoyed mudlarking here - entertaining travellers by retrieving coins they threw into the mud below the bridge to the harbour station and Gosport Ferry. Boys and girls would scramble to find the money tossed down, sometimes diving into the mud, performing handstands or dipping their heads in it. Many Portsea families lived in poverty, so the small change was welcomed. Usually, what the children did not spend on sweets or pie and chips was given to mum to help out the family finances.

Most parents disapproved of their children's activities, while the police regarded mudlarking as begging and tried to stop it. Mudlarking supplemented other ways of earning a few shillings, such as carrying passengers' bags or finding drivers parking spaces. The building of the new bus terminus in 1976-7 put an end to mudlarking.

Also inscribed is a list of names of previous mudlarks. This statue reminded me a little of Archie and Lillie, two mudlark characters in the book.


The definition of a mudlark is given by the Oxford dictionary as “a person who scavenges in river mud for objects of value. Historical: a scruffy or dirty child who spent most of the time on the street.” As the book is set in Portsmouth, I’ll keep to the Portsmouth mudlarks, although it appears that the term was widely used in London too, for those getting what they could from the Thames. Those living in London can still go mudlarking if they want to – it’s now for historical artefacts rather than spare change, but the link here gives details of dates that groups will meet up to go together. 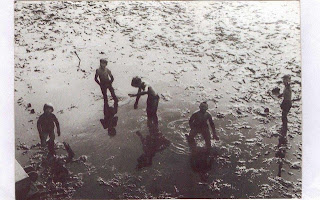 Margaret Foster is a Portsmouth councillor who campaigned for the erection of the statue in Portsmouth. She wrote a book, called The Mudlarkers, and for it, interviewed several former mudlarks. According to them, soldiers would empty their pockets to throw to them. “At the time they just thought their luck was in but now appreciate the significance of men giving away the last of their money before going off to war.”

While some have said that mudlarks could come from wealthier backgrounds, the general consensus is that mudlarks didn’t have much money. Reading Mudlark, it became obvious to me just how poor Jimmy and his mother were when I read that her ambition was to save enough money to buy Jimmy a pair of boots. 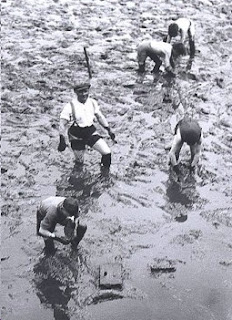 Plus, did you know that the Pompey accent isn’t far off from Cockney? People’s stories from online have people remembering mudlarks saying things like: “Bung us a bob matlow [Give me a shilling, sailor]”, and “Dip me ‘ead for a sparsy [possibly a sixpence]”.

Lastly, it seems fitting to mention a mudlark quote in Margaret Foster’s book again: “It wasn’t just the mudlarking. We’d chop up firewood and sell bundles of that, and jump on the side of people’s cars and take them to a parking space. We’d get a shilling for that.

“From the age of about five, we knew how to put a loaf of bread on the table. But we were quite happy to work. They were hard times but not one of the people I spoke to said they didn’t enjoy themselves.

“It couldn’t happen again. Not with health and safety and there isn’t that same kind of poverty. But we were safe children and happy children.” 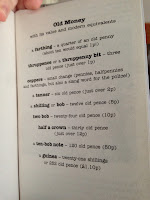 Old money
Helpfully, Sedden includes a brief explanation of old money so the readers know what the mudlarks are referring to - see the picture. I was going to try and put old money in context but it appears to be impossible, so if you're interested, this page gives a brilliant explanation of everything. 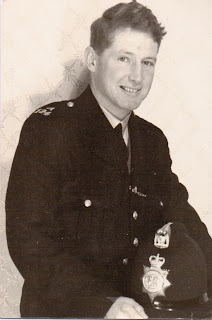 To conclude my little mudlarking history lesson (tee hee!), I thought I'd mention my grandpa again. I've already mentioned that he was a policeman in the 1950s and 60s, and that he and my grandma brought my attention to the mudlarks. Poppa told me that he was always reluctant to head over to The Hard whenever he was told to move the mudlarks along (as they were considered beggars) - they were only trying to make a living, after all. This picture here is him in his police uniform - I love it!

UPDATE: I sent my grandpa his own copy of the book, and he finished it in a day, saying it was delightfully over the top. My grandma is currently reading it. So there we go - a book for all ages!