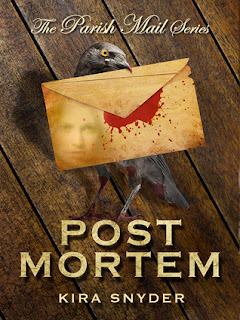 Celia Macarty is back in Post Mortem, the second instalment in the Parish Mail saga.

Autum in New Orleans means Homecoming, romance - and murder. When a friend vanishes, Celia believes a desperate letter about an unsolved Civil War-era murder holds the key to unravelling the mystery.

As she searches for answers, Celia enlists the help of quirky witch Tilly, and either all-American boy Donovan or enigmatic Luc - you get to choose.

As the gang follows the missing girl's trail, danger turns up on all fronts. A vicious stranger threatens Celia's family. Celia's nightmares - about a shadowy, ominous villain - get worse. And a new ghost has appeared: beautiful Angelica, who shares a past with Luc.

It will take all of Celia's will and wit, and the faith of her friends, to solve an unspeakable crime. And no matter which path Celia takes, she will discover that sometimes the past can come back to haunt you.

Having reviewed Dead Letter Office, the first of the Parish Mail series, I was contacted by Coliloquy to review Kira Snyder's second book, Post Mortem. I am so glad - I loved the last book, and if anything, this one was even better.

At the end of Dead Letter Office, the reader is told about a pile of letters that Celia has, in which she is being asked for help. This book is based a couple of weeks after the first, and follows the events of a letter from Celia's pile. Again, she has the help of best friend Tilly as well as Luc and/or Donovan.

The reason I said this book may have been a little better than the first is that it gets stuck straight into the adventure, without needing an introduction to the characters. The characters are established, and there's no pussy-footing around, wondering if someone will get weird with the level of magic involved. That was still great in book 1, don't get me wrong, but there was an instant hook in this story that I loved.

Talking about magic I think the way that magic is so effortlessly intertwined with normal life is really cool. Within a paragraph, Tilly can be whipping up some magical concoction and at the same time dig at Celia for gossip about Luc/Donovan/insert teen issue here. <b>[Mild spoiler in next sentence]</b> I have a thing for realism, so while in a different book I might have an issue with the protagonist leaving a big dance to go adventuring, in this book it seemed perfectly normal.

Snyder has created characters that will develop upon every sequel, and I think the series would actually make a brilliant TV show - I'd definitely watch it! As with last time, I enjoyed the choices I could make, although they seemed to have a further reach in this book, which meant I had to think more about what I chose. There's one towards the end that took me longer than it should have to decide, as it dramatically affects the climax of the book. There's only one thing slightly negative I'd say about the whole book, and that is that sometimes things were mentioned that only happened in one of the choices in the last book. For readers that, unlike me, didn't read all scenarios, that could have been an issue.

In brief (after a long review - oops!), a highly recommended book, and I can't wait for #3!