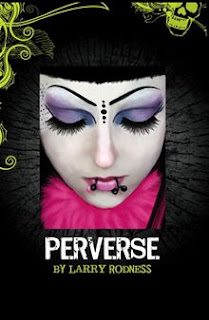 19 year old Emylene Stipe is a second-generation Goth who, like every teenage girl, is trying to find her place in the world. One night she comes across an old painting in an antique store and is compelled to purchase it. When she brings it home , an image of a young woman appears in the sketch and then magically materialises in her apartment. Emylene nicknames her 'Poinsettia' and they soon become fast friends. But Poinsettia has an ulterior motive for her sudden and strange intrusion into her host's life, which causes Emylene to question her whole belief system.

Having been approached by Larry Rodness to review Perverse, I was intrigued by the blurb. It's not often I read about Goths, let alone second-generation Goths!

Being honest though, I wasn't overly impressed with the beginning of the book. While it wasn't bad, I was a little disconcerted by the disconnected narrative of Emylene's life that led up to the start of the plot. There's setting the scene, and then there's over-egging it a bit. I didn't understand why such a big deal was made about Emylene being a 'princess' (except maybe to explain why she acted so spoilt), and certain characters (such as Nostra-Dame) have no bearing on the ultimate plot, so I'm sorry to say that if I hadn't agreed to review it, I probably would have put it down.

However, upon hitting the middle of the book, the plot got decidedly better and I found it really enjoyable. It was fairly different to anything I'd read before, and I loved the idea of there being a certain part of town that offers your wildest dreams at night in exchange for a piece of your soul and a slightly hungover feeling. Then, there were different aspects of Goth lifestyle I found interesting and were explained well by Rodness. Once it got going, it was fast-paced, and Emylene became less annoying as she had more of a purpose. There's also a sense of dystopia the further in I got (revenants taking over parts of town and slowly expanding), and you should know how much I love those by now!

So, while I admit it was a weak start, the book gets a healthy 3 stars from me for pulling it back and creating an unusual and interesting plot.